Ensuring each and every house in a district gets a door hanger or a yard sign or a piece of card stock in the mailbox can help push a candidate’s name into recognition or sway legislation. During the national/state election in November I got a lot of direct mail  – all of it going straight into the recycling bin – ranging from slightly disingenuous to out-right character attack.

These mailers are usually paid for by an entity with some skin in the game. They may want a candidate to win because that candidate would be kind to their industry, or they want legislation to fail because it would increase regulations and expenses pertaining to their work. In the case of local elections, the candidate of choice may be more likely to vote in the direction of the payers choice. Regardless, these communications are carefully crafted to provide just the information that makes their case. In other words, they are biased marketing materials meant to sway a voter who otherwise might not know the facts, context or history that is withheld from the communication.

Sometimes it is clear who is behind the mailer. Sometimes it takes some digging. According to this mailer it was paid for by CCPOC IEC.  The Indy says “The IEC of the CCPOC is run by Dede Laugesen, wife of Gazette editorial page editor Wayne Laugesen.”

According to the Federal Election Commission, there are a few things that must be present on communication of this type:

Local city council elections are no exception to direct mail blitzes and today we are looking at a mailer that came to my house concerning City Council District 3 – the race between Richard Skorman and Chuck Fowler. Here we provide photos of the mailer so you can see it for yourself followed by an annotated response so you can clearly see what information was printed, what was left out, and how these communication decisions can sway the reader into murky untruths.

Richard Skorman was one of the candidates to answer our questions about the future of Colorado Springs. You can read straight from him HERE. Chuck Fowler did not respond to our request for the candidate answer series. 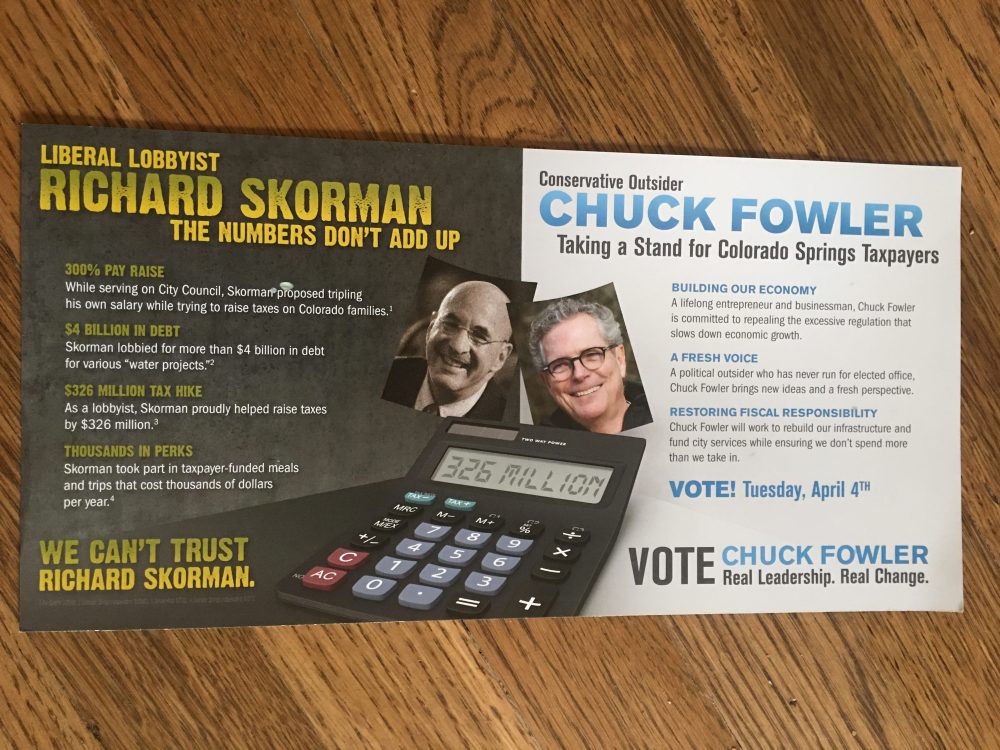 BOLD text is direct from the mailer. Block Quote is information added.

While serving on City Council, Skorman proposed tripling his own salary while trying to raise taxes on Colorado families.

Skorman DID propose raising the council wage when he was previously serving. At that time it still would have been under $20,000 a year, but that was the late 90s and early 00s and the Mayor wasn’t making much either. Colorado Springs City Council Members make $6,250 a YEAR for their service. Several attempts to raise council wage have been made. The most recent was presented in 2013 which proposed raising the wage to $48,000. The main argument for raising city council wage is that, currently, young people cannot serve on council as easily. Mostly, older folk living on retirement income can afford to do so. There is also an argument that more socio-economic diversity on council would create a better representation for the citizen’s of Colorado Springs. In 2013 five council members voted to place raising the wage to $48,000 on the ballot and four voted against it. Citizen’s did not approve the measure.

Skorman lobbied for more than $4 billion in debt for various “water projects.”

Quoting from the Gazette, September 10, 2005, “A wall of stormwater on June 21 broke sewer pipes in two places in Colorado Springs, sending more than 300,000 gallons of raw sewage down Fountain Creek and through Pueblo…The millions of dollars Colorado Springs has invested in the proposed billion-dollar Southern Delivery System water project…will be for naught unless the city moves quickly to correct its long-neglected stormwater problems.”

In the same article, Richard Skorman is quoted as saying, “If we don’t address our stormwater issues, its certainly possible we won’t get the support we need or the permits we need,” regarding the Southern Delivery System.

Yeah, these “water projects” the mailer mentions were the Southern Delivery System that brings clean water to the city and a support of stormwater infrastructure that has been needed for a long time.

Here is another quote from The Gazette, 2005: “Skorman thinks the council should act on its own to create the enterprise. And he thinks that funding scheme is the fairest way to pay for stormwater improvements, because fees are based on the amount of impervious surfaces on each property. ‘We’ve known we need to address this for a long time,’ he said. ‘We’ve studied it a lot. It’s not like it’s brand new. There is a lot of buy-in from many community groups, and from my standpoint, I’m hopeful there will be the political will to do it.’”

Not only that, but in a recent Gazette article, Fowler, Skorman’s District 3 opposition this year, praised the Southern Delivery System as “brilliance”.

As a lobbyist, Skorman proudly helped raise taxes by $326 million.

Maybe listen to our City Budget episode…Our city is underfunded in a lot of ways.

Skorman was instrumental in TOPS – the City of Colorado Springs’ funding of Trails, Open Space and Parks. It is a one tenth of one percent (.01%) tax passed in 1997 and renewed in 2003 until 2025. In my opinion, this isn’t willy-nilly tax hikes. This is important stewardship.

Skorman took part in taxpayer-funded meals and trips that cost thousands of dollars per year.

For SOME meetings of council, lunch is provided. It isn’t necessarily a perk, it is a working lunch where no one is required to fast. Trips for city council members are part of the gig, too. They represent Colorado Springs at the regional and state level and are sometimes called on as leaders at the national level. If they are not present at these meetings, then our local voice is not present. Council travel in and of itself, is rare. It is usually commissioners who are traveling. Imagine the government making a big decision about military personnel and spending. Since we rely so heavily on that, we should have a representative there.

If you want to know more about travel spending lately, you can read THIS.

A lifelong entrepreneur and businessman, Chuck Fowler is committed to repealing the excessive regulation that slows down economic growth.

Not the only businessman on the ticket for this district. Fowler owns a website that analyzes and reports on homeowner associations. Skorman owns Poor Richards, Rico’s Cafe, and Little Richards. He is a former theatre owner locally as well.

Fowler is quoted as saying that he wants to “grow the economy and full time jobs by ensuring that local government is not a hindrance to business expansion or relocation.”

The excessive regulation must be somewhere else.

Again, the Gazette: “Fowler said he has no government experience but has attended many council meetings and a couple of meetings of the Utilities Board, which consists of the council members…”

Seems like a bit of a double standard to me.

Chuck Fowler will work to rebuild our infrastructure and fund city services while ensuring we don’t spend more than we take in.

He said he would, “Work with Mayor Suthers and Council regarding infrastructure management and funding, with a focus on taking care of storm water needs.” That is the role of council. He has admitted that council has done a good job staying in a limited budget.

Now this I can agree with. Please vote in local elections on April 4th. Your mail-in  ballot should have already arrived. If you didn’t receive it, you can request a replacement HERE.